The power of storytelling

This poster  demonstrates, in a  very simple form,  some of the practical applications which I cover. Exploring ways to support children to create their own  written and illustrated story is really almost another session, but inevitably each workshop touches on all the various aspects and is, in any case,  designed to meet your specific needs. Some centres really want to learn more about the theoretical justifications for oral storytelling and others want to dive straight into the practice and have a go at being a storyteller.

Oral literacy and people ‘puppets’ made at the playdough table with the children after hearing the story of Sleeping Beauty’. There was a magnificent selection of loose parts made available by the teachers….. stones, pipe cleaners and toothbrushes!! and cinnamon play dough. Also a great example of a practice to encourage oral literacy. Descriptions and explanations are by the photos as you go through.

I made this when I sat down and was soon joined by a group of children. it is the castle and the entrance. Oh yes, the little sprigs of hebe were there too…….such terrifically imaginative and versatile bits and pieces.!

What was lovely to observe was the way a particular boy imitated the way I moved the king and queen around, all the time keeping up a conversation between them. Alas, I cannot remember it all!! but I loved it and he was a very versatile, articulate and cooperative ‘player’ who picked up ‘offers’ and accepted and then built on them. 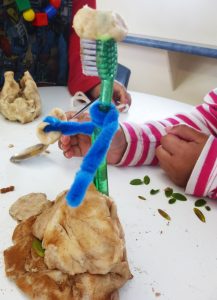 Another child adds another person, with hat and a lovely skirt.

The queen and her friend wanted to play in the park…and the arch was too small and apparently the castle was locked so I think we flew in….and played in the park.

Whoops! the gates to the park are locked…… and a dog is entering the script. How will they get out?

Every now and then the play dough would fall off, adding a complication to the plot about  losing one’s trousers. This character lying down is in hospital, attended by the doctor….. 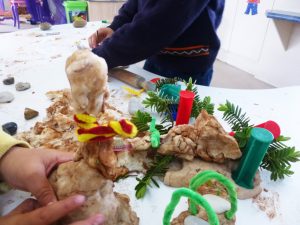 A hat has been discovered and worn by the queen but

a wild wind blows it off her head…..

The dog chases after it .... the hat is sinking under the stormy seas. The dog leaps into the ocean to rescue the hat. My main player is hysterical with delight by this turn of events……..the plot is advancing rapidly. Other children are creating dogs and bowls and balls… ( great confusion there when I cannot hear the difference between ball and bowl…….and keep insisting that dogs don’t like bowls with nothing in them. I am amazed at how determined children are that I should understand….. extraordinarily dim of me because he was holding a sphere!! But such pleasure all round when I work it out….and such a wonderful innocent and accidental context in which to appreciate the similarity of vowel sounds!)

The dog bit the queen on her bottom and she has gone to hospital. Her dress fell off and so she is under a blanket.

Fashion conscious queen much recovered with a new and stylish hat.