What a strange circuitous route creativity takes! On the Kapiti Coast I heard a story called The Sultan and the Magic Rooster from a woman who works with people with special learning needs from the UK and then I learnt it, and added opportunities for more and more participation by the children. Making bee sounds, sucking up water sounds, putting out fire sounds… and the indignant chorus line, “Oi! Give me back my diamond”.

I did it first at a library story telling session and made a table top puppet for the rooster, with a papier mache head on a  hard cardboard cone. 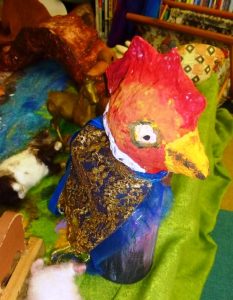 Then I told it (propless) to a group of kindergarten children and during the day, I made a picture of a rooster at the 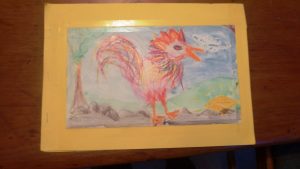 art table and made it into a book cover.

My plan was to draw or paint all the other pictures but of course there was no time. However, I worked out how many pages there needed to be, and at appropriate intervals I had a full page with the words of 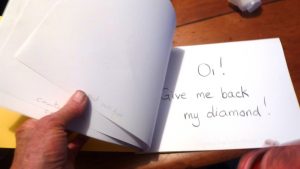 Because there were no images and no words, the children were inspired to help me tell it, and I dutifully turned the blank pages as the plot  unfurled. Then I would come across the chorus, and they would all bellow it out joyously! And so the story was retold, and the blank book serendipitously became another part of my storytelling repertoire.

So many things constellate to create new ideas and the process of creativity becomes increasingly fascinating, as one thing triggers another and cross fertilisation happens. This is my idea of what will happen when storytelling becomes part of a centre’s culture. So then, that rooster can be in five different stories and bring his storylines, strategies and experiences into a variety of contexts, weaving a rich tapestry of complex neural  pathways. 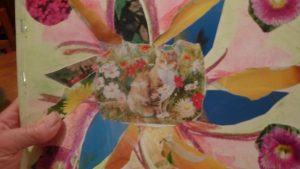 A further development was that I made another book with an image of a cat in a garden on the front but no words inside. A child said,” It can’t be a story. There are no words”, and so I took it to mat time, and asked three children to come up with me, and tell me the story of the cat in the garden. 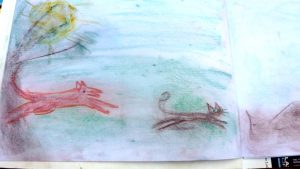 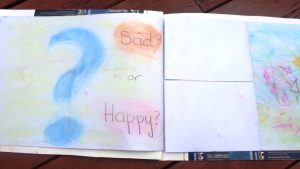 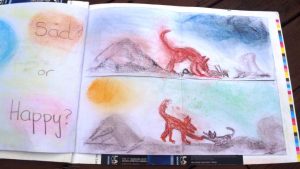 They did a wonderful job, and then another three children told  a second story, using the same provocation of the cat sitting amidst the flowers. What is remarkable is that each story had both a  happy and a sad ending.  Before work the next day, I quickly drew the two stories and the four endings into the book and ‘read’ their story to/ with  them,  which had now  become a book, but still without words. Which they listened to with great attentiveness.

This evolved at another centre soon afterwards, when I read them the children’s two  cat stories and invited them to  create a story too. I then produced a few random ‘cover’ title pages to choose between, and they chose the car image. 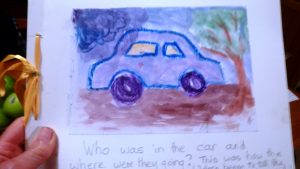 So I invited another  three children to tell us what happened in the story. The plot unravelled about a cat and a bunny who went for a picnic, were chased by a giant bear and tried three different strategies for escaping from him before remembering they had a car they could escape in!

Then I was on outside duty and started to do some drawings for their story, and of course, they all leapt in. I could have drawn a story board of required images which would have been good for them to work out what was needed but would also have suggested a ‘right way’ of drawing an image.

There was no time, there was a howling gale and everything, paint, paper,pencils, felts,  brushes, small lids of paint with bunched up tissues with which  to smear a sky or some grass in, so that it could be rubbed ‘dry’ and be safely stacked … all had to be held down with hammers and lumps of wood, but nonetheless, half a dozen children or more, contributed images, announcing what they planned to draw. I occasionally said “We still need a picture of when…….” One image was of a horse which I asked politely if I could turn it into a bear cos I was one short. And a younger child’s image conveniently became an image of panic and fear, whilst her other circular spiral image made a very good hole to trap the bear in. 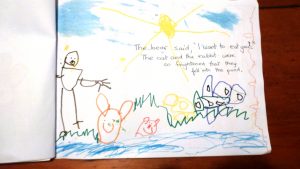 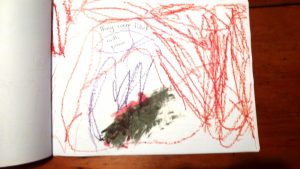 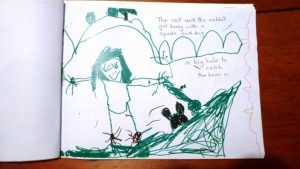 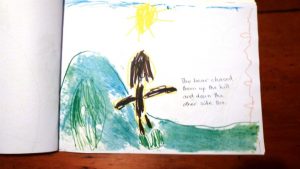 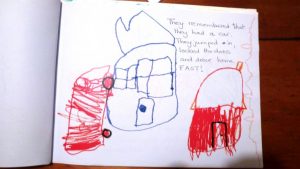 Then I sewed the whole book together, made myself a copy, and read it to them at mat time.  I think such a story is such an empowering experience, introducing a playfulness, flexibility, creativity and collaborative creativity, along with a strong sense of agency. They were so engaged, and I was happy as Larry with a project to work on, rather than drifting vaguely. I am very taken with the concept of a ‘planted adult’, meaning that I stay still and they swirl around me, but I am predictably and inspirationally engaged in their midst.  I like to think.

The two stories above were more about the bones of a story and less about the flesh. We filled those in when we drew it, in a way. When a child has drawn some images and I am writing the words that tell the story alongside the image, I like to think I ask questions a bit like those lovely guys in the Flight of the Conchords. https://www.youtube.com/watch?v=Ca4ty7tz9x0  Listen to how they interact with the children. They are genuinely interested in learning from the children. They ask questions to which they do not know the answers. They accept whatever they children offer and do not block their ideas. The result? simply magical. i like to think that when i ask children to tell me their story when they create a book or some such that i also play the pa rt of ‘naive enquirer’ as well as these dudes!

I took a dictation about a party. it was for the King. I asked if the queen would have been there too., Her answer was that the Queen was allowed to come. So I wrote that. (Meaning that instead of . adding ‘for the king and the queen’…i wrote,’ The Queen was allowed to come’. It conveys a complexity of relationship that good stories always have) She told me that she wore a purple dress. i wrote that. When i asked if there was any more she could tell me about her appearance, she explained that she had gentle shoes on. Gentle shoes, I said, what are they?”They are not high heels, because these people are fairies and not ginormous”. The result was splendid, just like the stunning song about feeling inside and ‘stuff like that’. So the final part of this trilogy was last week when I redid the story of the Rooster with a magic tummy  http://caloundrastorytime.blogspot.co.nz/2006/10/turkish-sultan.html  at another kindergarten.

Day one, I told it with their help. Day two, they helped me to tell it, and I used the book and they bellowed the chorus, and learnt the meaning and gesture for ‘indignation’, captured by the word ‘Oi!” in my opinion. Even by this point, one parent had commented that this was the longest story that her daughter had ever regaled her with at home. Other parents commented similarly over the following days. There is something, I believe, about the fact that I did not need a book that made the children appreciate that neither did they. 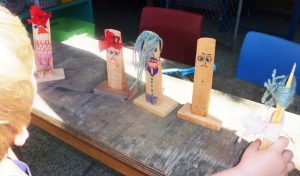 Day three, I had made small table top puppets out of wedges of wood during Day two, and they were quite simple figures. No glue gun, so I had to wall staple the hair on.  That night, I embellished them quite a lot and was very pleased with them. I adjusted that courtiers who gave advice so that there were three of them. 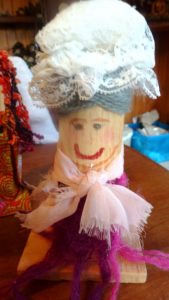 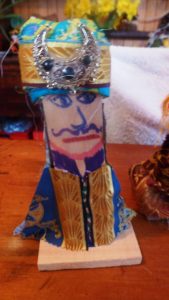 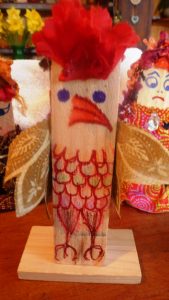 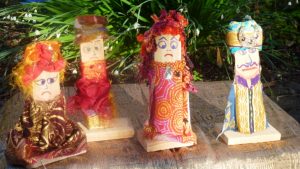 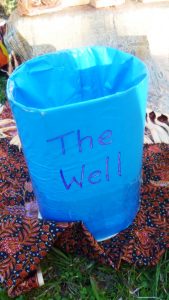 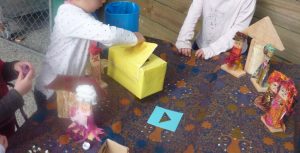 And then at mat time, I set it out with different heights and fabrics and walked the story through. Oh, and I had also adapted a tissue box, a shoe box, and a cardboard cylinder into a bee hive, an oven and a well. They children helped me to decorate and create them. 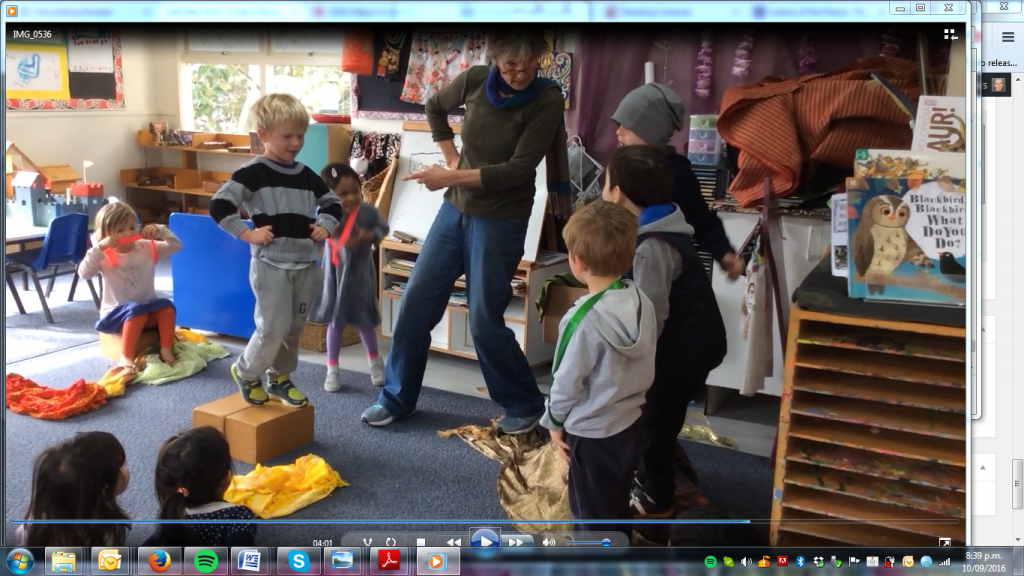 Day four, we did it as a dramatised live version. I sewed up loops of different coloured wide ribbon while stuck in traffic jams on the way to work, so they could be worn like netball player sashes. Purple for the sultan, gold for the rooster, green for the old lady, and yellow , blue and red for the three courtiers who think up the three ways to get rid of the rooster.  There were also three sarongs to create the ‘traps’. Blue for the well, red for the fire and yellow for the beehive. A few blocks for height for castles and window sills.  In the moment, it suddenly became obvious that the rooster could actually stuff the blue water up his jersey until he spat it out in the oven to put out the red fire cloth. AND we found a way to put the rooster down the sultan’s baggy pants.  A bowl of ‘treasure’ of plastic diamond looking shapes were also always incorporated into each telling of the story.

The children finally knew the story so well, having  seen it, heard it, read it, small-worlded it, and now played  it, and also retold it at home. It was so marvellous to see how far the story had travelled over the four days. And what a great sense of ownership and interest had developed in the children. And how many children felt empowered to extend their oral literacy at home, and tell their parents stories as well. I am  not sure about the moral but certainly there was a message that greed does  not end well.

P.S as you can see there is a video. If I knew how to upload it, I would. In the meantime, I have permission to share it at my workshops so I look forward to being invited to provide a workshop for up and coming storytellers.