Five years ago, on Saturdays, I used to walk four kilometres up two hills to Titirangi, have a coffee, do the cryptic crossword and walk the four kilometres home again. Then, in the winter of 2016, I stepped, slipped, and slid on a slimy wooden plank, subsiding into an inelegant and painful plié in the vege garden. Twice. In one week. On the same plank. Go figure. And that was the end of walking to Titirangi. 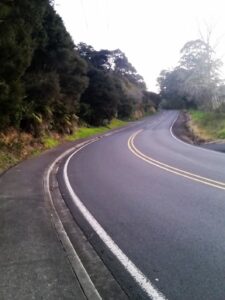 I had torn my right adductor. Along with unfamiliar pains, over time my posture began to deteriorate, my pelvic floor collapsed, a labral tear was revealed, I became more knock-kneed, pigeon-toed and eventually, I realised (to my horror), I had begun to stoop. Over the following years, I have done yoga, and regular physio, had CT scans and a cortisone injection, received brilliant massages, bought Feldenkrais pelvic floor lessons (success! yay!), used Vibra-train machines, had craniosacral treatment, regular osteopathy with two different practitioners, pressure release sessions, online classes learning how to walk again, acupuncture, etc. All these helped a little, offering brief improvements and my walking tolerance eventually and gradually increased over the last year to the occasional 20 minutes. But often followed by pain. Frequently I would express my frustration by saying “I actually need to learn afresh how to simply walk”.

The gift of a tripod, at the end of lockdown in 2020, and the resultant video of myself walking (with saw and shovel!), exacerbated my shock at how appalling my walk had become. In fact, I tried to force/correct my walk overnight after seeing the video and ended up in excruciating cramps for 3 or 4 hours.

Despite all this, I remained eternally optimistic (or blinkered?) but was horrified last summer to once more come a serious cropper while working at a kindergarten. I was standing on a wide dry flat wooden ledge surrounding a sandpit. Leaning forward to warn a boy not to jump off a high ledge with a cape around his neck, I obviously shifted my weight forward enough to enable a hundred tiny sandy ‘ball bearings’ under each jandal to propel me gently forwards till I found myself suddenly and unexpectedly kneeling, concertina-ed, in the sand pit below. I would have been fine but unfortunately, as I folded up, I cracked both knee caps HARD on the sharp edge of a wooden boardwalk. (The children seemed to understand that there are times when a single explosion of the F-word is forgivable …understandable, even). I swore, not so much because it hurt like hell; it did… but because I immediately knew this would be a major setback. It was.

That incident truly screwed things up as I compensated left, right and centre. I developed a limping gait and endlessly shifting areas of pain in every part of my legs: knees, adductors, piriformis, abductors, quads, front flexors, glutes, lower back, etc. They just didn’t have a clue how to work as a team. Sleepless nights became commo 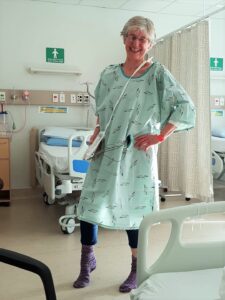 As before, every slight improvement was usually followed by a relapse/recovery phase. In the first years, I often managed the pain and inflammation with Voltaren, but a ministroke (TIA) in November 2020, (see photo of me in hospital above) meant that Voltaren was now contraindicated. (Because of statin medication). The pain needed to be managed other ways. BUT, the need to walk and take exercise became even more pressing. In July 2021, a doctor told me that I should take yet more drugs: to lower my blood pressure. Rather than take what seemed to me to be a lazy passive approach, I researched how to lower one’s blood pressure. Google revealed that a minimum of 150 minutes of fairly vigorous walking per week was necessary as well as a transformed salt free, bad-fats free, sugar free diet.

Then, miraculously/synchronistically, a friend mentioned Hellerwork. She was incredibly enthusiastic and I recalled once being a Hellerwork ‘guinea pig’ at a practitioner training event many years ago.  I looked up Philip Hurring’s website and read the testimonials. Enough said.

I have now had six weekly sessions with Philip in which we work with different areas of my body structure and how I move and live in it. Each week another little piece of the jigsaw falls into place, and another part of my muscular-skeletal body and its matrix of fascia and connective tissues are reminded how to cooperate with their neighbours and allies. There are 12 sessions in the series that Philip provides and I count myself supremely lucky to have completed a crucial (for me) sixth session on Monday, just before lockdown on Tuesday. My body and I turned the proverbial corner. 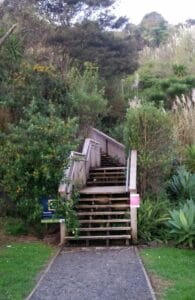 The day of lockdown and the day after session 6 (in which there was a lot of focus around the feet) I set off in the drizzle in the late afternoon with the intention of walking maybe 30 or 40 minutes (things were already improving). But, bouncing along, with my big toes helping propel me forward, I reached the bottom of the 220 steps of the steep wooden walkway that joins Landing Road and South Titirangi road. This was as far as I had walked before in my daily efforts to get stronger and the goal was to, each day, one day, eventually, go up more and more of the steps. I started upwards. 10, 20, 40, 80!…. I was able to keep going! It was possible. It was pain-free. I had the strength but most importantly, I also had the long-lost ability to coordinate my limbs so that my knees did not fall in, my bum did not stick out, my head was held high, my breathing was easy, and my feet were mini champions. Up and up we went. (Me and my limbs!)

Unfortunately, (but also very fortunately*), I did not have my phone or my parka. Neither I nor my daughter had any idea that tonight was going to be the breakthrough night, that I would be gone for almost two hours, and that I might seem to apparently have gotten lost in a muddy ditch in the dark, in the rain. Oh dear.

It got darker, my legs powered on, and the quickest way home eventually was just to keep going and complete the circuit. I was also a bit nervous of going back, and tackling downhill on 220 wet wooden steps in the impending dark. I emerged onto South Titirangi Road. Solitary walkers and occasional runners. A rare car. Lockdown. A light drizzle. I reached the village as evening starts to close in. Wow!

The darkening lowering sky feels ominous. The temperature drops. A sudden strong wind whips the tree branches.  A torrent threatens. Stepping over the startled agapanthas, I retreat backwards into the rough silent shelter of a huge dark pohutakawha trunk.  People in parkas run, ride and cycle through the rain. I can see them; they don’t see me. The water hurtles down the gutters. It’s cold.

Then, just as suddenly, the rain and wind start to ease. I can see a lighter sky to the west. I step out again and walk on. Everything feels fresh. Barely a car and I can hear the calls of birds, fussing and squabbling over sleeping arrangements. Dusk has truly fallen. I hear a gaggle of geese somewhere to my left. It is so still and quiet that I hear the tinkle of water gently trickling below the gratings in the gutter. At Tangiwai Reserve, the spur-winged plover is still threatening non-existent intruders to his mate’s nest.

I am finally on the home straight, up a steep hill, when big drops start to fall. I quicken my pace and hurry to reach the tell-tale dry semicircle on the pavement, untouched by the earlier squall, below a manuka tree. Once more I back my way up the bank, crouching precariously on the pampas grass clumps, holding on to a branch overhead. It’s dark now. A car’s headlights reveal the monsoon-like downpour, huge droplets of rain bouncing off the asphalt. I tuck my exposed knees in tighter. 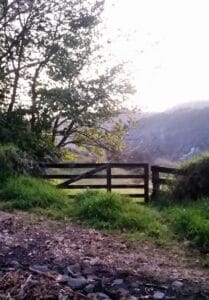 As the rain slackens, I see, on the opposite side of the road, the silhouette of a dilapidating wooden farm gate. The last light from the setting sun out on the West Coast reveals the undulating slopes of open fields beyond. Everything is now in tones of grey: the fields, the gumtree trunks, the distant bush-clad hills, all cloaked in ever darkening shades of grey, slate and black. This misty monochromatic silence is magical and timeless. And silent and still. Just the water dripping from the trees.

Alone, snugly crouched up against the bank, I feel connected with the earth, the weather, the trees and I feel hugely privileged to be there, far from the cosy domesticity of electric lights and heaters. I belong. I have been given a gift. The gift of being able to walk for two hours. The gift of being able to be out amongst nature’s changing moods and light during peaceful unhurried lockdown.

I return home to my relieved daughter. I am exhilarated, somewhat damp, and amazed that I am not in pain and I am not exhausted. Praise be.

The following evening, I return to take a photo of the gate (shades of a beloved Cornish childhood?) and to climb the 200 steps again. No, I had not imagined the miracle of the night before! This time I feel safe to descend as well and am rewarded in the half light of twilight to meet a 12-year-old girl and her father on Landing Road. I greet them and she reveals that she has just done 100 cartwheels in a row down the middle of the road. “It’s an achievement day!” she cries. And I share my achievement from the night before. “I walked all the way to Titirangi and back for the first time in five years!” “You’ll be doing100 cartwheels next!” says her dad. Sort of…. actually, I plan to dance. 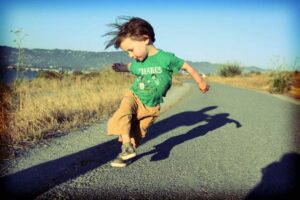 P.S. *’Fortunately’, because if I had had my phone, I would have taken photos, reassured my daughter, succumbed to asking for a possible lift, and I never would have written the above. Or had the experience of being raw and exposed in nature, in the dark.