Whenever I am in a centre and want to tell a story with table top puppets,  there is invariably a problem that all the two legged characters behave as though they are permanently inebriated, There are the cute family dolls with bendy bodies and large wooden feet and, with a chair or a wall, they can cope relatively well. But there they must stay.

Then there are the Lego characters who  have large heads and smallish feet and cannot maintain their balance without a vehicle to prop themselves up in. Steiner dolls are great at standing for the most part but they don’t survive very well with children reared on indestructible plastic toys. Also they usually tend to be girls because their flared bodies lend themselves well to a skirt shape. And of course they have no feet. But this is surmountable with some imagination. Which children usually have ten fold or more.

If I want to be able to tell the story of the Three Little Pigs (who meets a total of three men in the course of their adventures) or ‘We’re going on a Bear Hunt’ in which quite a tribe of people set out over the countryside in search of a bear, I am hard pressed in almost every centre to find ‘people’ who can take on the role.  There is no way those first people can stand unaided while the bear takes up the pursuit back through the snow and the mud and the river.Also I want to  have people whose construction could involve the children. 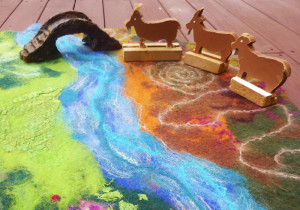 So, possible solutions? My first tabletop puppets were found on a shelf out the back of a centre, en route to the rubbish dump. They were cut out silhouettes in some sort of customwood, then painted, and finally wedged into a rectangular lump of wood with a groove down its centre in which the animal or man could be glued. These stood up very well. But the process was pretty much all an adult activity bar the painting. 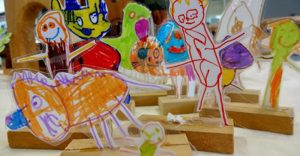 Here is a great solution, The story telling characters created by the children, with the help of adults, at Mairtown Kindergarten in Northland ( see their facebook page and the video with it)  used a similar idea for creating upright characters for storytelling. The children drew dragons and monsters and whatever they chose, then they were laminated and inserted into the groove of a wooden ‘foot’. Stability here we come, and the children told great yarns with them. 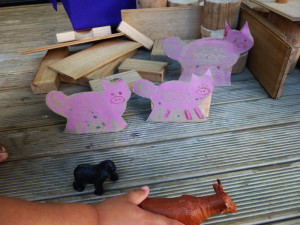 Equally I have drawn (or stuck images cut from out of a magazine ) onto stiff card and simply nailed them directly onto block of wood. As we did with these three pigs at the carpentry table. Stories were rolling as fast as we could hammer. Houses being built and destroyed and blown away right there at the carpentry table! And children could help nail them home and colour in the characters. 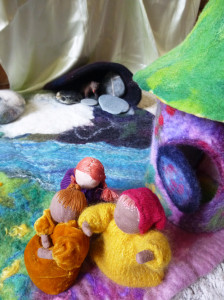 Another ( longer adult labour of love) solution is to use the idea from ‘Nature’s Corner’ published by Floris Books (same place as the teasle hedgehogs) and make heads with wound carded wool covered in Tshirt material and then sewn into a bag shaped like a body.  They also have little hands. These three are huddled together as they approach the bear in  his cave  but can maintain uprightness even when travelling solo through a landscape.

Another way to make upright characters is to use the very hard cardboard, (although sometimes plastic) cones that are a side product from industrial sewing. Heads can be attached, either by papiermache-ing a lump of pulp onto the cone and waiting for it to dry before painting it, adding hair etc ( pulp is very much a summer sport!) or by wrapping a round polystyrene ball in either tissue paper or cloth and attaching it to the cone with hot glue.
Then one can add suitable clothing to the cone section. This is how these characters from Sleeping Beauty were created and they have survived alot of use!

Here is another shot of the cones plus papier mache heads which have more tissue added to give a smoother surface on which to paint facial features. These ones were made with the help of the children. The smaller ones were made from blocks of wood and champagne corks hot glued together and then papiermached before becoming the seven dwarves. The children love the slurpy smoothing way one has to add the paper and stick it down before adding more layers. 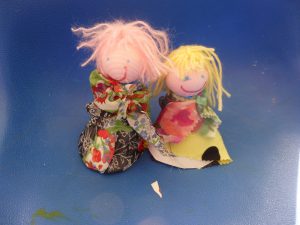 Today I used the cone and polystyrene ball to good effect at a kindergarten. The children were engaged right through the process. I will add another post showing the stages but not today. (And it may appear under ‘resourceful resources!!)

This post began with the mention of Rata. I need to make a free standing puppet who can look worthy of felling an extremely mighty totara tree! I wanted to share my journey with you. We are still on the road to a solution. Not only does he need to stand upright, he also needs to fit into the waka which is already made. Maybe it was a mistake to put the cart before the horse, or the waka before the Rata!

I hope this was a helpful post and gave you some ideas on how to create characters for story telling that can withstand the rigours of use. There is no harm in encouraging children to take care of the resources nonetheless, and that is one of the reasons why I like the children to be part of the production process!