(and song!) Such fun today! a very long

elasticated orange ‘rope’ and some hugely creative and animated children attempting to tie knots and play with it in every way imaginable! Their knot tying efforts galvanised me into finally experimenting with creating a story

to help children learn the basic  principle  of knot tying… and away we went…
Once upon a time there was a very very long and spotty orange snake who had a problem. ( quick desperate thinking to think why a snake might want to tie a knot in herself…. how does the brain work, i wonder?). The problem was that she was a sleepwalker and every night, when she was meant to be safely tucked into bed, she would slither out and find herself, eyes closed, slithering down to the park, or the playground or the river.. and in the morning, she would wake up and have to find her way home, which was hard. So she needed to find a solution. I asked the children for their ideas for a solution. She made strong gates and locked them? ( great idea, I agree, and draw them on the board of our story, BUT she found that she could find the key even when she was asleep!) Or, maybe she could tie a note around her neck, saying ‘If you find me slithering asleep please take me home to this address’. And that was a good idea but she wanted to stay in her own bed, in her own house… so she came up with an idea.

She TIED herself to her bed. And then I drew a snake’s head on 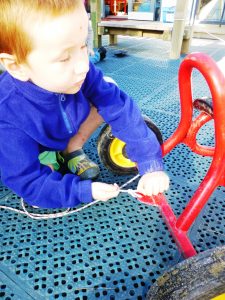 the end of the orange rope and showed how she turned her head round and looped back OVER her own body, and then dived down UNDER her body and came back up THROUGH the hole/loop she had made… then she pulled on her head and pulled on her tail and bingo!!. I showed them three times and then three children came up and did it successfully.. over the body, under the body, up through the hole and pull tail and 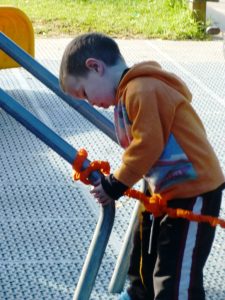 At lunchtime I bought twenty metres of cheap thinnish rope and made a dozen lengths and the children practised and tied things all afternoon and it was brilliant. It is so so helpful to have a pictorial image… it is a very Steiner way and it helps so much. Many of them were experts by home time! a delight… tying up bikes, tyres, bottles, themselves, a student teacher and making a rope barrier to hang a STOP sign on. Such a delight to watch their animated approach to the challenge. Even doing a double snake to make two short ropes into one long rope! ah the joy of storytelling and its infinite adaptability! The bit I liked best was the idea that sometimes her Dad woke up when she started slithering off and he could just catch her tail before she finished sliding through the front door and just haul her , hand over fist, all the way back in again! Because she was SO long!
And, if I was really onto it, I would make up a little song to the tune of Frere Jacques, like that…Loop over me, loop over me…….. dive deep down, dive deep down, back up through that hole, back up through that hole, p

Here is a learning story for one of the children who relished knot tying.