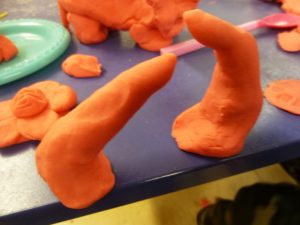 I posted this quote last night and today a long session of play at the play dough table made me realise just how true that is. By playing alongside the children and indicating to them that I was up for some play in which we could say that something was ‘whatever-we-liked’, so long as there was a passing resemblance, I started by wondering what two pink objects left over from earlier players could be..’Are they sad wizard hats? Are they limp pink carrots? Or are they collapsing pointy fingers?” The children agreed on hats, so after trying to make them stand up as happy wizard hats,  I took them both and mashed them together and made one solid wizard hat. Meanwhile the children were making other things and conversation sort of went around things that sagged or collapsed or broke…oh, yes, one boy, Richard, let’s call him, leaned over and broke one thin sad wizard hat in two. And it broke, which is why I made one out of two.

(Digression: much later on, another child at the table made two fat circles and I enquired if they were binoculars or zeros or doughnuts, and he pronounced the latter. When I looked his way a while later, it had become one fat doughnut, so I drew another mathematical equation showing tw 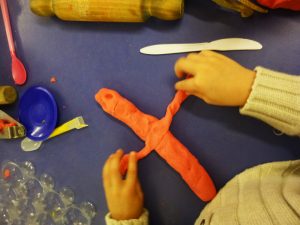 o small doughnuts = one big doughnut. Strangely, although I knew nothing about this particular lad apart from his name, it turned out that he was a bit mathematically inclined! Later,he made a fat sausage lying vertically and laid a thinner one across it horizontally…

He said no, it was such and such, and I eventually appreciated that he was saying that it was a sad plus! Because its arms drooped when he held it up! I love the imagination of children…. I was way behind on that one! How do you know about plus, I asked him. ‘My Mum taught me’, he replied.

So back to the main story…well, there were about four or five stories (as many stories as there were players!)…but ultimately they organically wove together with a bit of adlibbing narrative commentary by me.

Once they realised that I took my (and their)stories and play seriously and did not find it funny when Richard (and others) mischievously squashed my creations   (that old sand castle scenario!) they started playing in a similar way. There was a boat dock and boats and there was a huge pumpkin wizard who eventually arrived in a frying pan boat 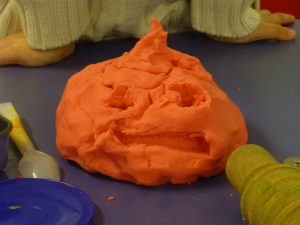 and there was a family of smaller wizards laughing (apparently)  as they made their way in a punt to the island. 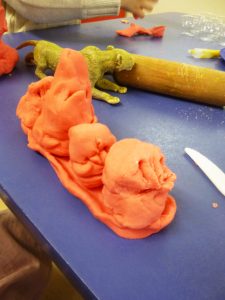 There was a mother wizard who rode to the island on a tiger, 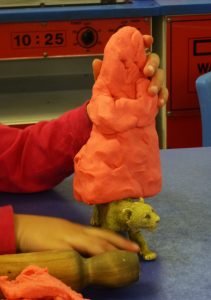 there was the happy wizard hat who came to the island by boat, 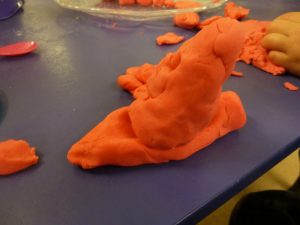 there were some ‘ball stairs’ 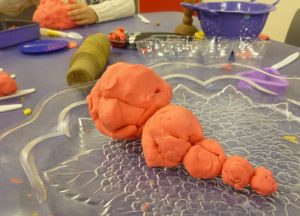 on the island which had to be climbed upon arrival 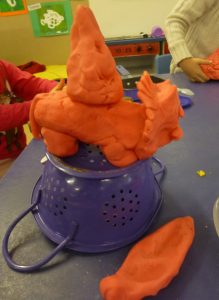 and there was a lion (made by me to see if I could make something that looked like a lion.. we tested it on another teacher and she was able to recognise it. We worked out how many legs it would need – ‘Three’ said Richard….’How many at the back?’ asked I ‘Two’. ‘And at the front?’ ‘Two’, and you, my gentle readers, know the rest…. And he got a tail and a mane and so on. 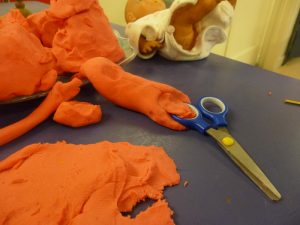 Well, we still haven’t reached the crux of this post!! The boats needed tying up, according to Richard, and so there were fat sausages rolled into rope and the scissor boat was tied up,

and the small rowing boat was tied up and the tiger that carried the mother was tied up. 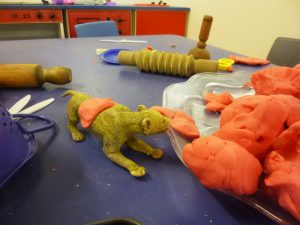 And we all generally agreed that it was not a good idea to let things float away. That we wanted things to be where we left them and not to find the tiger had wandered off into the forest.

This became such an important topic of conversation that Richard and I retired briefly to the carpentry table to make a different sort of boat that you really could tie up. With a nail at the front to loop the loop of the rope over, and we came back and tied that to the island. 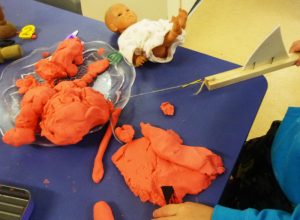 And then it was lunch and hear this, dear reader, during lunch I (being  a reliever for only a couple of weeks and not knowing any of the backgrounds  of any of the children) enquired about Richard’s story . It turns out that Richard’s parents have recently separated and he has acquired two new step-parents in a very short time and each of the new partners have already got children themselves as well. That makes for a universe that is pretty full of things that look like they are, or actually are, in danger of floating away. I find it very moving to discover this link between his inner world and the play metaphors he chose, whereby to express and in some way maybe resolve his understanding of some pretty big challenges. I am full of admiration for his emotional integrity and the way he is using ‘just playing’ (so-called) to find a meaningful metaphor for what he is experiencing in his life.

I recently read a book called ‘The Examined Life’ which suggests that if we can’t find some way to tell our story, then our story starts to tell our life for us, and we are no  longer the major scriptwriters. The unspoken script runs our life for us. I find this a very true statement. This was referring in particular to a client whose first twelve months of life were traumatic (but was told otherwise, and could never understand why he always felt afraid and acted accordingly). Here, through the subtle metaphors of happy and meaningful  play, a boy is making meaningful patterns and sense out of his own story, and placing himself in a pro-active and powerful role within the script…as the tie-er upper-er.

Later, just before home time, I was cutting up some plastic boat shaped forms to fill with 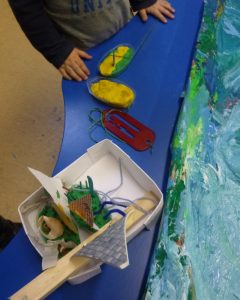 old play dough for tomorrow and Richard and Lily helped me cut them out. I asked what boats sometimes need, and we agreed that sails could be important and Lily thought a captain’s wheel would be good, and Richard suggested an anchor. So we made anchors. It’s hard to get a piece of wool to stay ‘tied’ to soggy play dough so I suggested that we could tie the ‘rope’ around an ice-block stick and bury it under the entire boat- shaped lump of playdough that filled the form. He liked that and made yet another one, this time tying one end to an ice-block stick and one end to a large pine cone. He generously offered the latter to a friend because he now had four boats altogether to take home. He went home contentedly showing  his  magnificent fleet to his mother.

Today I had the pleasure of one day’s work in a distant kindergarten. Story telling is rapidly becoming mydefault setting and I decided, since it was wet and uninspired but we were sheltered outside around a big table, to record the vignettes and stories which the children volunteered as I got to know them.  I drew and then wrote about one girl and her absent brother and their  matching raincoats, then about a scarecrow made by another boy at his church out of a spoon and an iceblock stick which he brought to share at  mat time, about how one girl was going to go to Hawaii and swim with the dolphins, learn to surf and eat a coconut! Such diversity and colour and range! Soon they were writing their own books, adding illustrations and then dictating the words for me to write.

A story about one girl’s mother who disappeared into a ‘pink mole’ for three repetitive pages ( she drew her in pink, and then surrounded  her in pink and disappeared her. I was relieved when she emerged, albeit with a broken foot and needing support from her daughter! Another wrote about a monster who ruined a party by throwing all the cupcakes up into a tree.  One book was all spots, page after page, but getting less and less………’as she got tireder and tireder and tireder’. To my surprise on the last page was a picture of a very  happy large person. And the girl dictated to me… ‘and so she had a spot of something to eat and was happy and not tired any more’. What a great sense of word play! Or maybe she was unaware of it?

I learnt every child’s name, was supported by the children to get them right and learn more about them and be introduced . The boys came later but once they saw what was up, they were into it as well. ‘This is a zoo, and here is a burglar, He wants to steal the laser light from off the sleeping elephant’s trunk, but the dog barked and the elephant woke up and the burglar fell off the zoo and smashed his head’.

I read the whole book to them at the end of the day and had their complete attention as they listened to a record of their whole rich and diverse community and looked at pictures they had drawn or helped me to draw. I left the book there for them, so I have no photos to share. I have never done this before quite this way but it was wonderful to have a sense of really meeting each child in their own context, occasionally having to explain what I was doing and asking if they could clarify what their play involved  so that I could write it down, but mostly just taking what was volunteered and recording it, or simply recording what I observed.

Again, I am struck by how storytelling makes use of the theory of loose parts as much as play does. When the children have free range in their minds and memories of everything that they have ever imagined, heard, seen  or read about, they are at complete liberty to assemble characters, props and landscapes in whatever way they like and the results are , as usual, creative, playful and delicious. I wish I had made a photo copy. One could even enlarge it and make it into a re-visitable document. I wrote it but it was very definitely ‘their’ book.