What was once a wise recommendation to support children’s drawing without drawing images for them seems to have gradually evolved into a powerful absolute with regrettable consequences for teaching practice. When I heard of a centre where this guideline has been extended to an instruction to ‘never, ever draw with, for, or near a child’, I was galvanised to explore why it is that I sometimes do draw with and even ‘for’ children, and why I instinctively feel that it is of value.

What are the perceived hazards of drawing with a child? Primarily, children will think that yours is ‘the right way’ and will slavishly imitate you, thus cramping their creative self-expression and motivation to discover for themselves.

Being creative in front of children

Should one then also not assemble a train track, sing, make mud pies, dance, or tell a story in front of a child in case they conclude that these are ‘the right ways’ to do those things? Will children therefore think their own efforts will not be good enough? How does one scaffold creativity? And what if Grand-dad doesn’t know these principles? What is the danger if younger children emulate older siblings and peers? What happens when a child receives five different impressions of how people sing, draw, work in the garden, use playdough and tell a particular story? Clearly children successfully cope with this, just as they are able to learn three languages before they are five, simply through exposure. Should we stop being creative because children are watching? I believe the reverse is desirable: that we should model (and advocate for) creativity. And challenge, as Simon Nicholson did when he proposed his theory of loose parts, the elitist mindset whereby ‘the vast majority of people’ have to leave creativity in music, painting, architecture, literature, and the sciences to the ‘creative gifted few’.

Giving children a leg up

Many children who seem to lack confidence often confirm Ursula Kolb’s and Pennie Brownlee’s contention that, ‘Draw me a cat’ really means ’Please show me how to get started on a cat’. They are asking for a way in. Brownlee suggests saying, ‘Where would be a good place to start? Maybe with a fat tummy?” If this fails to inspire, I find that after modelling a brief sketch, on my paper, of an oval body sort of shape, children will then happily add a variety of ‘appendages of cat’ to their own ‘fat tummy’.

There seems to be an implicit assumption in ‘never, ever’ that teachers cannot draw with a child without automatically falling into the role of ‘expert’: ‘This is how you draw a cat’. I suggest another way: “This is how I, Evelyn, draw a cat, and I know my sister draws them like this. Of course it depends if it’s a mean daddy tom cat or a kitten?” And then to start drawing something that is not too caricatured or predictable. Maybe find a cat and look at it! I tend to draw Steiner style, with the crayon held on its side, with shaded areas of colour (see photo), rather than hard outlines.

If you have not experienced contexts that support artistic creativity, play and exploration at your own pace, then you might be a four year old who avoids the drawing table. I find it disturbing to meet an increasingly large number of children with this attitude. I suggest the underlying causes may include lack of access to materials, pressure to write as soon as the pencil grip appears, insufficient appreciation or interest, an excess of inappropriate praise, over direction by ‘expert’ adults who want specific outcomes or over exposure to adults who role model the ‘I can’t’ approach or repeatedly ask ‘What have you drawn?’ My own view is that there is often insufficient role-modelling and advocacy for drawing.

I am concerned that ‘never, ever’ means that some teachers rarely draw as equal artists and fellow creators, alongside children. Or that when they do, they often demonstrate (perform?) detailed stereotyped complete (and practised) images. Respectful playfulness is key, I believe. There is even a tendency for teachers to skirt the drawing table altogether, arriving only to add names to the ‘stagnant artefacts’ (Susan Wright) and a child accurately reads the subtext that drawing is not highly valued. Too many children, in my view, are learning that we never sing without a CD or tell a story unless we have a book. The arts need more powerful advocacy than the hidden curriculum that they are ‘nice but not necessary’, ‘just a stepping stone on the path to writing’, ‘they support fine motor skills’ and ‘keep them quiet’.

Susan Wright in ‘Understanding Creativity in Childhood’ acknowledges Vygotsky’s concept of drawing as ‘graphic speech’ and Ray and Glover in ‘Already ready’ describe 3 year olds who read their ‘story’ consistently over a period of days to different listeners. To the untrained eye, the images look like random uncontrolled scribbles so, to appreciate the visual literacy and the increasing repertoire of ‘signs’ with which these children communicate, it is necessary to experience the whole event. Interestingly, the teachers do not write the children’s stories down as this deprives the children of rightful ownership.

Wright (2006) and Kolb (2005) articulate how children, when drawing, don’t simply create static end products , but draw in ways that are improvisational, fluid, and highly meaningful. Children often narrate a running commentary both as narrator and as the protagonists, sometimes adding sound effects too. These children gathered around a board are busy communicating collaborative working theories. 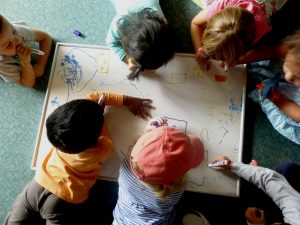 Children often  move and use body gestures and facial expressions to amplify and clarify. They change their ideas, mid-stroke, of who the characters are. “She is a princess. I am leaving the castle”.

Drawing can be a visual equivalent of dramatic play and Wright describes it as a ‘multimodal, multifaceted visual narrative’ in which graphics (drawing),narrative (talk) and embodiment (movement) all enrich and inform each other. It’s like storytelling but in a much more fluid form. The following picture was drawn by a child with English as a second language, who was adamant that she could not draw but was encouraged and moved to do so as an accompaniment of her dictated story about playing hide and seek with her brother. Nowadays, you cannot stop her from endless creative initiative. 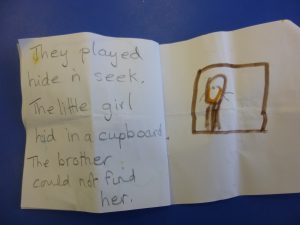 Given half a chance, children will move from the conservative constraints of inert paper into other ways to express themselves. Hunter who was originally reluctant to draw (see photo) drew himself saving his two brothers from zombies. Describing cutting out the zombies, he then literally got the scissors and cut them off. One could put his name on the remaining scrap and send it home but we have missed its meaning if we are not there alongside, documenting the full event. We would also have missed out on observing his delightful learning dispositions (experimentation, problem-solving, curiosity, trial and error, accepting ‘failure’ to justify another enthusiastic replay, playfulness and resilience). As you can see, my playful modelling of ‘giving it a go’ re drawing dinosaurs did not diminish his enthusiasm for drawing a space ship! 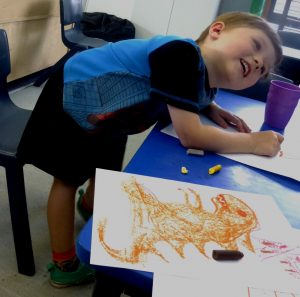 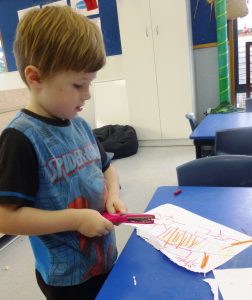 When a child is reluctant, I tend to draw alongside, but for myself at first, almost as a ‘naive enquirer’. Taking on the role of ‘expert teacher’ can cast children into the complementary role of ‘passive learners’, who then lack initiative, resilience and creativity. I approach as a playful, collaborative, responsive and interested equal; as a fellow learner. I come not with an agenda to teach drawing, but instead to support a growth mindset in which learning a new skill becomes playful and pleasurable rather than a threatening test. Just like creative, confident children, I change my mind, I appraise my work, I talk out loud about my ‘visual narrative’, I borrow ideas and colours, I adapt the ‘plot’, I model ways to improvise with unanticipated outcomes. In fact, I model how we learn anything; I take risks, I try new things, I watch, I ask for help and advice from the others, I welcome ‘failures’ as interesting challenges. I do not praise or flatter fellow drawers. We are equals. Incidentally, I probably draw at the level of a competent 10 year old. 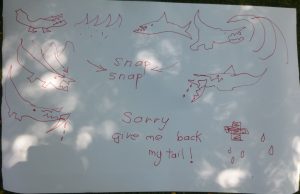 I often co-create stories with children, using a white board. Later we re-tell, act out, draw, illustrate or recreate the story, referring back to our images if needed. Sometimes I will draw their suggestions and sometimes I ask a child to draw. So, for effective and speedy communication, I do draw in front of the children, in fast scruffy graphics. This gives another opportunity to model imperfection (even laughable incompetence!) as ‘good enough’ for a given purpose. We are increasing our repertoire of accepted visual signs, augmenting visual literacy, and confirming that communication sometimes takes priority over artistic accuracy. An ‘idea of a flower’ is very different from the observed study of a sunflower. One is more about communication with others and the other is about creative self expression and documentation of observation. One is creating reality and one is recording reality. This seems to be a distinction that needs to be understood more fully when it comes to saying ‘never, ever’. I believe children are able both to use simple graphics to think and to communicate symbolically and they can also use different techniques to create a ‘work of art’. Both have their place and are not mutually exclusive.

In summary, although I would love to see children living rich, textured, colourful lives, surrounded by creative people who are still growing and learning, for many children it is a much more humdrum and predictable existence. Humanity, warmth and shared worlds are my priorities, with oral and visual literacy as secondary, but very welcome, by-products. To paraphrase Diti Hill, ‘Once the kindling has caught fire, one can stand back and leave well alone’. More and more children are needing a helping hand to get the kindling alight and for me ‘never, ever’ in this age of institutionalised childcare does not meet the needs of many children I work with. So I play on.