In less than five minutes, I had fashioned a quick cheetah on one of the wooden bases I sometimes bring with me. And I remembered that the very first time, half a year ago, I had brought them, that very birthday boy had wanted to make a wolf. He/we made a wolf, and he produced a book at the centre, which clearly indicated the shape and colour of a wolf’s eyes.  And he let the puppet stay at the centre, as a centre resource. It was still there!

Ceremonies over, I began the tale….on  one of my storytelling mats, purchased by the centre.  I did not know how it was going to go… I had the river, I had height – a tall wooden block…(for the visibility and mana of Cheetah!) and a tree.  And so off I went…. “Once upon a time, there was a Cheetah who was turning five. It was his special day, and there were so many things he was good at. He loved to run (demonstration circuit on the mat), he could jump on other animals ( casts around for ‘prey’, finds Moana’s ‘flax’ skirt/ piu piu and mistake it for a spider! (black and white hairy legs variety!) and he could also climb trees.(Does so ). 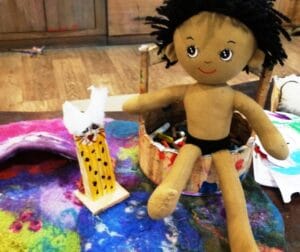 But there was one thing that Cheetah could not do, and he wanted to do it, because he was hot! Very hot! And he didn’t know what to do. He couldn’t swim because he was a cat. And cats don’t swim.

(Casts around quickly to spot someone who could maybe help…. Spies Moana, lying skirtless but definitely a potential problem solver). “Tane! What can I do? I can’t swim, but I am so hot!!”

Tane answers, through the voice of a child…. (I have asked for ideas and help) “You should drink lots of cold water”.
Cheetah replied “That’s a good idea and I tried it, but  it just made me feel like I was going to pop!”
Tane said, “Then you should ask my brother, Tawhirimatea. He  might be able to help cool you down”.

( I had noticed the puppets from the Creation story as I walked into the story room, and so I leaped up and retrieved 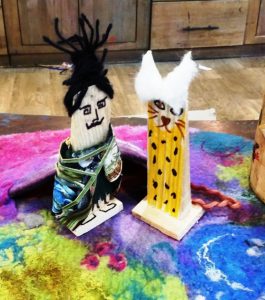 Cheetah, “Tawhirimatea, I am so hot, and I can’t swim, because I am a cat, and cats don’t swim”.

“I could blow on you to cool you down”, offered Tawhirimatea. “Yes, please” said Cheetah.

At this point I have no idea how the story will resolve itself, and I increasingly become aware (as I write this up)  of various adages that I have learned and grown to appreciate (and clearly integrate)  from Improv classes. “First jump out of your plane, and then find your parachute”….. we are now at the door step of the crux point… the third person to be asked is likely to have something worthwhile to offer, but I have no idea what it is. “Everything you need in a scene is right in front of you”. And even more powerful, “The only security is that there is no security”.

So jump in at the deep end, and bring Wolf onto the ‘stage’, and

(my) immediate response is “Goodness, you have even more fur than I do!! Aren’t you terribly hot? How on earth do you manage to keep so cool?” (Cos you are one cool looking wolf!….missed that joke opportunity!) (so many questions are buying me time!)

Yet another basic rule of every good story…. any story you can name… is “always reincorporate significant earlier events or characters”. Wolf replies,” Why, I swim of course!” (I am grateful to you, Wolf, for your eminent common sense!)

This still doesn’t quite solve Cheetah’s overheating problem! But Wolf is not dismayed. He is channelling He Who Made Him, as well as the energy of Cheetah, who is nothing if not fearless!

“I’ll teach you how to swim!” cries the jocular and confident wolf! And down they go to the water.

“First you go in up to your ankles” instructs wolf. Cheetah does so… “Oh that feels so good!”. And now you have to go in up to your belly button” continues Wolf….”Ooh, that’s quite cold. Oh, that feels very good. I like this.” (in retrospect, I love the way these instructions perfectly take into account what every small child knows about entering water)

“And now” urges Wolf,” you can go right up to your nose, but don’t get your ears wet”… (something could happen, but I forget what now) and so Cheetah did, and before he knew it, he was swimming.

And so I moved them down the blue river, with Cheetah in the front. And they had a race.

“And Cheetah won!” cried out the birthday boy from the sideline! Yes, of course!

And that was the story of Cheetah who could not (he thought) swim.

I loved the simplicity and format of this story so much that I quickly whipped off during lunch, and took photos of the key characters.