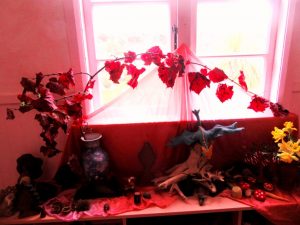 I returned to work in a kindergarten where I had not been since autumn. When I was there in April I had created, in a tall vase,  a display of vibrant red autumnal leaves from an ornamental grape vine. When I returned  in August, with spring in the air, I was disappointed to find the dried grape vine leaves just where I had left them. I was stewing crabbily and judgmentally on my disappointment when I noticed something green among the dusty leaves. I was stunned to see a burst of new life, a fat green bud with tiny grape-looking flowers in its centre.

It seemed such a salutary life lesson in some way for myself that I was moved to create a story about a crabby old woman and the change of seasons. So I did. I started by creating the verses which give a story a structure and a rhythm and repetition. They changed as the days passed but finally stabilised. This is the story…

And these are some of the principles that I took notice of when I was creating it. I wanted to include rhythmical memorable lines that I could repeat each day. This way the children would be able to look forward to the accurately repeated  lines each day, and I would not have to learn the entire story word for word.

I incorporated animals and events that were real and alive for me. I chose a pattern of three f

What else did I do? I recorded myself telling it to see how long it took to tell. I told it out loud to myself in the bath in the morning in the days leading up to the telling. I attempted to keep the pace slow and old woman-ish and slightly dreamy. During the telling I used my hands and body to demonstrate the physicality of the cat and the dog and the ants… When the cat was purring in the old lady’s lap, I stroked the imaginary circular shape of the sleeping, purring cat. When the dog leapt over the fence, I used my arm to indicate how he leapt. When the ants bit the old lady’s leg, I pretended my hand wa

s scurrying around the back of my shin before the old woman slapped her own leg, etc, etc.

I thought about the temperaments... the phlegmatic sleepy, snug cat, the choleric Digalot the dog digging and chasing and refusing to come when called. I appealed to the empathy of the listeners when Suzy, the old dog, died in  her sleep, and again, as they heard each animal respond  to the threat of the axe chopping down the tree, and the urgency with which they knew they needed to act to save the grapevine. And the sanguines love all the adjectives and descriptive words which are in the verses and in the descriptions of the behaviour of the animals…the cholerics also got a moment of adrenaline when the  captain or grandfather of the ants  called on the swiftest, most agile and most courageous of the ants to go into action and fight for the life of the grapevine.

I included references to the senses... the taste of grape jelly, and the sweet raisins,… the smell of …no I did not include smell…  the feel of Greysmoke’s warm fur, the

cold winter chill of a winter’s day, the warm relaxation induced by the sun’s rays,  the sound of purring like a miniature well-oiled  tractor, the sound of the old woman trying to whistle, the scuffing sound of Digalot digging For the sense of sight,… the juicy purple grapes, the green bud unfurling, the daffodil bulb that looked  like an onion,… so I did include the senses but not deliberately. If I had thought of them, I might have consciously included a few more… like the texture and taste and smell of well chewed old slippers!… or the texture, smell and feel of the sun-warmed corrugated iron, and so on….

I like the fact that I spoke openly about the fact that pets die and that it is very sad. It felt good to name it, and also soften it with the acquisition of the puppy. One other detail I liked was to include a compassionate view of the new young puppy who never sat when asked to sit, never came when whistled for, etc etc. We have a new child in the class who is intensely like Digalot in this regard, and it felt good to say that the puppy was young and that he was learning and that he did not mean to be naughty. It was simply that he was indeed a young puppy. And to hold the child in my consciousness and even, occasionally, in my gaze, while I described Digalot’s behaviour.

Whatever I did, it certainly held the attention of the children for four days in a row, and one child  even asked ‘Is this story about you?” ( The cat was once mine, the dog that died belonged to a friend of mine…. and my mother was forgetful but never that bad!) I made a felted house for the children to play with and which I used to introduce the story and occasionally I referred to it, tracing the journey Greysmoke took to get to the roof, and the place where Digalot hid the old woman’s slippers so that he could chew them in peace! and so on and so forth. The hanging was left out for  the children to play with and populated with other puppets who were available..I did not have a dog but the kangaroo looked very doggy like or foxy ( as one child commented) if you ignored the joey in her pouch! so we made do!!

It felt like a very healing thing to do to tell a story that somehow made bigger sense of my smaller, rather petty response to the continued presence of the  grapevine. And it was a pleasure each day to reach the point in the story when the old woman sees the wonder of returning spring. Each day it felt alive and powerful and special. On the very first day, no one else in the room had spotted this little miracle so they were all delighted to run over and see it for themselves when the story ended and also to experience the wonderful miracle of the seasons…. and fancy the old woman forgetting all about the cycle of the seasons, and isn’t it wonderful that indeed the seasonal wheel is turning back towards the warmth of summer and fresh growth. 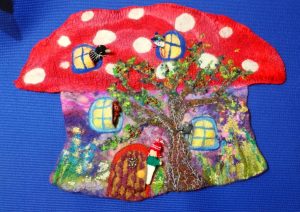 And then I made another house in a toadstool,  with more windows and space! i have embroidered it a little, and added a  door knocker and ‘apples’. I like this one a lot too! And will happily make something similar for you, and you could give me the specifications that you would  like!