Walking around the house in search of appropriate fabric to dress a troll, I notice that I instinctively make a face a bit  like a mean troll. There must be some subliminal belief in sympathetic magic. And it does seem to help although if I keep doing it while cutting, gluing and painting,  I start to get sore shoulders from hunching meanly and threateningly over my work!! Maybe it’s time to make some fairies and lighten up!! 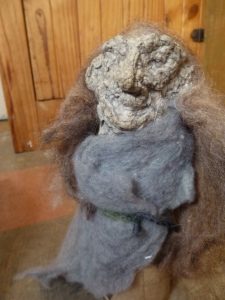 I am trying to  make a troll for the Three Billy Goats Gruff. It’s not easy. I made one in three minutes for a storytelling session last year, using a base that was intended to be a giant for Jack and the Beanstalk, and just tied some clothes onto him and gave him hair. But the four year olds all actually gasped when I pulled him out from under a cloth.(He was too big to fit under the bridge!). So he is probably too mean , too big and not good enough. Here he is. He does stand well though, to his credit!

And here is another ‘troll’ whom I found on a Gisborne beach but is also a tad big and a tad scary but what an amazing piece of driftwood! And how extraordinary that he works from BOTH sides. I drew in an eyebrow and darkened one eyeball. And he is not free standing. 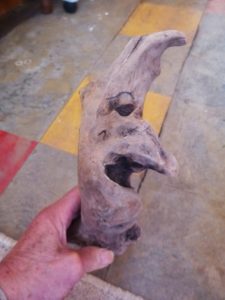 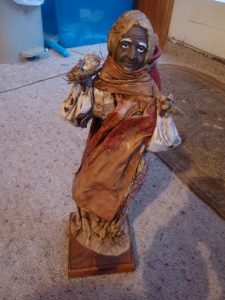 Once again my problem was how to make a free standing puppet/character who would be resilient for play, the right size and aesthetically pleasing in some way. Felt seems too soft, cone figures too wide to fit under bridge, and so on and so forth. Then I found this statue at the shop called Habitat for Humanity in Henderson and bought  her for a dollar!

I don’t know what the central column is but all her clothes and wraps are made with paper. Shiny strongish paper which can be shaped into lovely flowing lines. She is carrying a ceramic pitcher, holding it with two ropes, you can just see it over her right shoulder. She is far too tall but she gave me a great reminder. 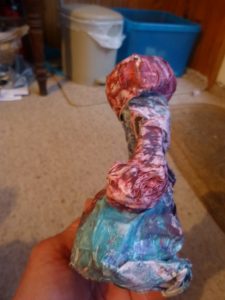 of                   collaborative splooshing and gooping with PVA , paint and ‘stuff’ on  a large piece of slightly shiny paper sellotaped to the table. When we had finished ‘exploring its scientific properties’ , we  had to tidy it up so we started rolling and scrunching. One child made a ball with it, and it all stuck together because it was so soggy-ish, but not TOO soggy (it became a very dangerous ball once it dried!) And I suddenly saw the possibility of squooshing a large piece into a doll. So quick, so perfect and so so so sturdy! She just needs a painted face and a little fabric scarf and she would be a great character in multiple stories. 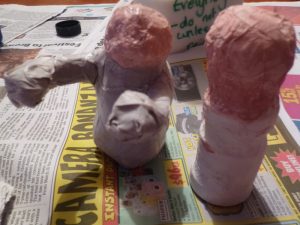 of two Yakult plastic bottles, and papier mache pulp and then painted pinkish on the head. I made the arms out of twists of paper which I attached to the body in the same way you apply a bandage to a finger so that it stays on. Well, something like that. You need lots of strength and thickness around the armpit joint cos that is where the pressure will be applied. In this photo the troll has his arms out but I realised the bridge would have to be very big to accommodate such a gesture, so I reshaped them, before drying, into a sort of ‘put your fists up’ posture. They took a few nights on the heater to get dry and hard and strong but they sure are. And what does a troll look like?  well, that is a hard question to answer! Sort of hunched posture and very large hands and ideally a big nose? 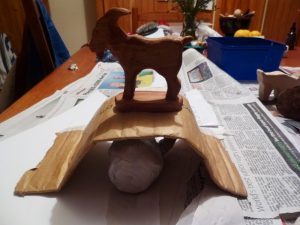 Here he is lying under the bridge which is being  made to fit him.

Next time I will make enough room on top of the bridge for both the troll and the goat to stand up there! For now, the troll has to stand beside it, on the bank of the ‘river’.

And now the question relating to the title! Does a troll wear silk or a 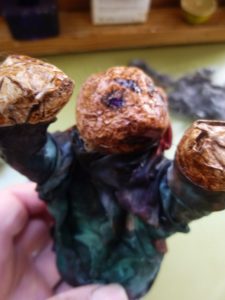 felted wool patchwork sort of coat? and do they have beards and how do you make a scary face? with regards to the latter, be aware that felt pen is a bad way to start because you are stuck with it. I am using my watercolour paints and have tried a number of times. But not happy. He looks too cute. How does one do mean eyes…slitty looks asleep, round looks surprised, …..great discussion material to have with children?!

So how does the other one look in wool. Better really 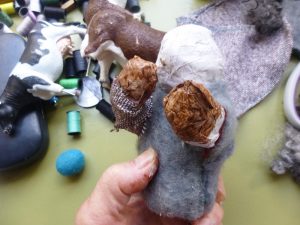 because it was a thicker fabric and I used the hot glue gun instead of the PVA. And I used a number of small bits which looked scruffier and better than a well tailored outfit. Also I didn’t hem his jacket sleeves because he is a troll and it doesn’t matter if he looks unkempt, which saves time! In fact, I used the water colour paints to daub  him with a bit of  mud here and there!

I think that is enough for now. I need to go back

to actually creating things for the Titirangi Market tomorrow  ( last Sunday of every month). I will keep you  posted as to how I resolved his  hair, the facial expression and whether or  not he has a beard!

And as for silk or wool, I think next time I will experiment with leather. I have some nice soft earthy coloured bits. Probably the rougher ‘suede’ underside. Mmmm, yes, I think that could look good. And do trolls wear  hats?