I can’t get past what wonderful opportunities stories are for language extension,  and in this context, fine motor skills, not to mention a familiarity with pattern, sequence, and  numeracy, etc . Like any new activity, story ad-libbing  takes time to become part of daily culture and expectation. After a few weeks of exposure to the possibilities of recreating  stories while at the carpentry table, play dough table or sandpit, the children increasingly join in, make suggestions and generally take over! Which is, of course, the goal.

In the meantime I get to have quite a lot of fun being the primary narrator and maker. There are so many opportunities to ask children to support: to remember the next bit, to make another eight coins for the giant or to make the cupboard behind which Jack can hide, or to invite powerful vocal participation for the Fee Fi Fo Fum bit. ( One girl leapt to her feet in absolute delight, crying out,”That’s what my Dad says to me!”)

So here are the images, and I hope that you as the reader feel encouraged to go for it too. Children do not expect perfection. If you say, ‘and this is the chicken which lays golden eggs’, then they accept that that is what it is, mostly. If they don’t accept it, then pause and maybe someone else can offer a more acceptable hen! 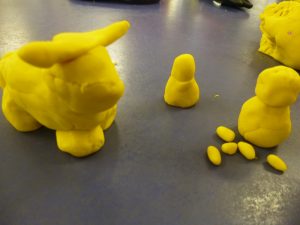 This beast ( on the right) is admittedly the hardest character to create but  it’s just one egg like shape with another egg like shape for the head, four more for the legs… more conversation possibilities here about what else does a cow  have? horns, tail, etc……

And so the story begins with Jack (in the middle) taking the cow to market to sell and trading her for five magic beans. Numeracy! ( if  you need justification!) 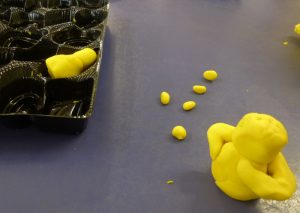 This is Jack in bed with no supper, an irate mother and five beans thrown out the window. One long sausage wrapped around her back gave me the hands on hips posture I hoped for. 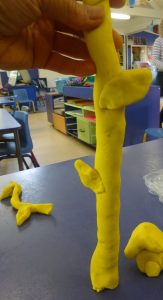 And what do you know! in the morning , the beans had germinated and sprouted and continued to grow. Much rapid sausage rolling and leaves attached.

At this point you have probably realised that I was far too busy narrating and rolling to be taking photos.  So these are post action mock ups! And with no danger of including photos of children for whom I have no website permission. At the time it was very lively, with about six or seven children involved and participating and listening intently. 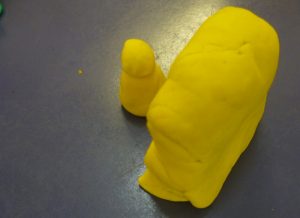 And here is that mystery person at the top of the bean stalk with words to share with Jack, who was amazed to discover that she knew his  name! 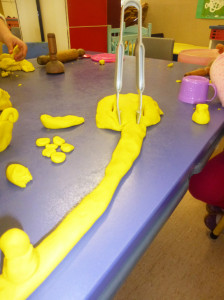 This is the part I really rather like and that is to be modelling ingenious ways to overcome the lack of ‘correct’ props and to improvise. I regard this as a sorry lack in our current consumer society; one can buy every thing and one does not have to exercise ingenuity and imagination. So here are some plastic tongs doing an admirable job of being an imposing castle door for Jack to see as  he walks along the road to the front door!    It was a bean stalk and transformed ( by obligingly lying down) into a road!

Here is the Giant’s wife with a large table (mug) and Jack     can just be seen on the other side of the table.. And now come the footsteps!! And the Fee Fo Fi Fum…. 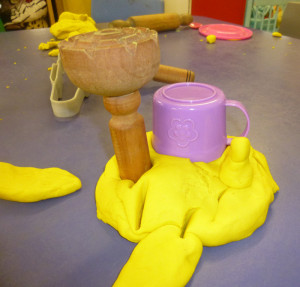 Giant and Giant’s wife and golden chicken on the table after dinner and Jack is hiding behind the cupboard.

The idea of having a playdough base for the castle was by chance but it did make it possible to stand up ‘people’.

This is the bag and the ten golden coins which Jack will also run off with once the Giant is asleep. And then the harp which sings and can call out to its master when Jack runs off with it. And in the last photo the Giant is chasing Jack down the road, with the harp calling out. Alas, there is no photo of the Giant lying collapsed in a crumpled heap beside the chopped down bean stalk. One girl suggested that an ambulance would be needed. I told her that no, actually the Giant was dead because he was so heavy and he had fallen such a long way down. Should I have accepted the more benign change to the storyline? I certainly could have discussed it with all the children, but alas I did not, merely marvelling at what an enormous hole Jack and his mother would have had to dig…opening up more dialogue about being able to employ people to help you when you have that much wealth. The end. 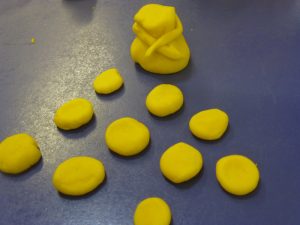 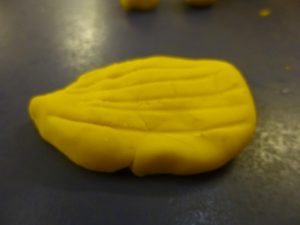 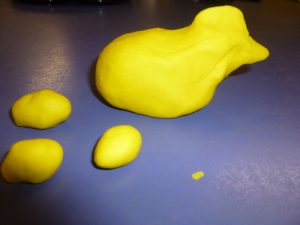