This short (I hope) article carries on from yesterday’s one about making standing figures for table top puppet shows. This one involved the children as well and could easily be adapted to make a set of characters for stories with five or six characters…Rata and the Totara Tree, ( Rata could have a headband and a small feather glued in. And I want to get some quilting scraps from my quilting friend to make him a simple loin cloth…keep watching!), Little Red Riding Hood, Sleeping Beauty, the  men in the Three Little Pigs ( and many blessings on all those four legged animals who can hold themselves vertical with no help at all!), and so on. 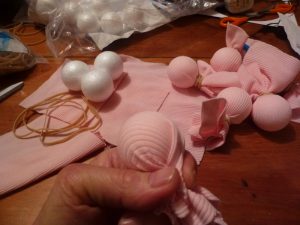 Take any pale pink cloth AND brown. A bag of 50 polystyrene balls ( this seemed the safest way to use up the ones I found in a resource room).  Ideally, stretchy T shirt material. Cut a square so it is easy to gather the four corners and grasp around base and tighten, finally fastening with a rubber band ( not too big, although actually it does help create a neck, so ok, big is ok.)

Step Two. Prepare stiffish card by drawing circles around a tea plate. Draw in the diameter and cut in half. The card should be such that children can cut it and stiff enough to be glued with a (cold) glue stick without caving in.

By the way, the picture should enlarge if you click on it. I made about twenty five heads in no time at all, and I prepared the card as in the photo the night before. (Good fabric scissors make light work and should never be used on cardboard – be ruthless and so keep them sharp for yonks!)

Step three: Originally I made the cone and stuffed the head in but that was a mission. Best is to curve the card into a cone and once it holds its shape, sort of, hold the head inside the cone, (having cut out that little circle shown in the drawing, so the cone has a top opening ).

Keeping the head firmly inside the cone, ask the child to clamp the cone firmly closed with either sellotape and/or a stapler. Allow no chance to unravel and release the head. Now wind around and around the neck with some think sticky tape of sorts….not sellotape I think. I found a thin sticky blue tape that stuck well and not too wide.

Although the head should be firmly wedged into the cone ( don’t make the hole too big!), it is then good to wind tape such as masking tape or some such around and around a few times, sticking onto cloth and onto body.

Step three: You will also need, once you arrive at work with your booty, the following:

1.Scissors so children can cut card. ( It slows down the onslaught and demands. Children can help each other so that fast ones aren’t ready too fast.) .

2. Lots of small precut cloth fabrics. I had a bag of light chiffon bits which are ideal. The clothing is attached with a cold glue stick so the lighter the better. Long strips of something sturdy can be cut into lengths and made into scarfs if the tape is too visible etc or if they have Isadora Duncan aspirations.

4. Bits of stiff card to wrap wool around for hair.

5. Variety of wools to make hair out of.

6. A few felt pens to create eyes and mouth. Demonstrate on card how small dots can look better than trying to draw an eye, let alone two, on such a small head.

7. Sellotape to attach wool to section of card to wind round and round to make the hair.

8. One hot glue gun on the side just to attach the last twist of fabric around the body, like doing up a button, cos the cloth only sticks to where it is sticky and it is quick to just fix it firmly and finally. Once the hair is on, it’s a fiddle. 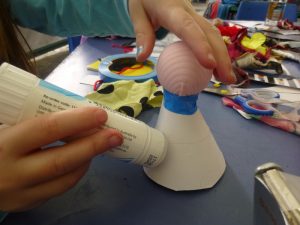 STEP FOUR: Add glue generously. Choose fabric and wrap around, fixing it closed with the hot glue gun if need be. 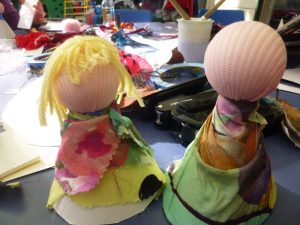 STEP FIVE: Choose colour wool for hair. Stick one end to piece of card( do it longways for long hair, shortways for short hair). Let the child wind it round and round and round ( remarkable how little winding children do…and remarkable how some children completely doubted that they could do it. Till they just did it, after watching me for a minute). 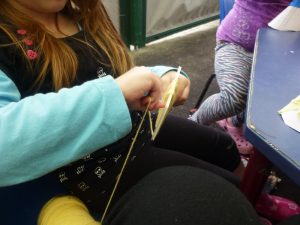 STEP SIX. Insert a piece of wool under the loops of wool and tie it tight along one edge of the card. Then help the child to snip along the other edge of the card. Hot glue the hair in place, being sure to join threads down the back of the skull and leaving an opening at the front. Although making a fringe is fun! See Miss Yellow Dress and Yellow Hair above.

STEP SEVEN.  Carefully trim hair, add face details, and maybe glue up inside the cone so that the edge of the 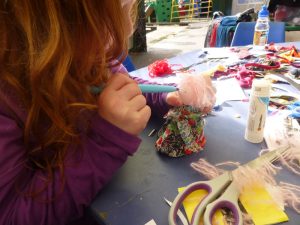 garment can be softly folded under (as you can see on pink haired doll on the left).

And there  you go! I will try to make a simple set for a story for next week. And I will share the images with you.  Thank you for reading if you have made it this far. And please feel free to share and let people know that I offer storytelling workshops in the Auckland area.